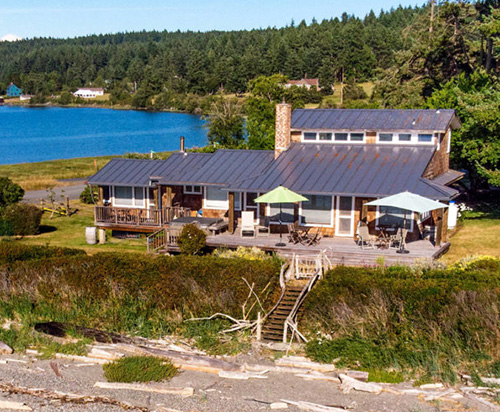 Available also at: Lopez Center Office, Paper Scissors on the Rock, Lopez Bookshop, Lopez Farmers Market
Sponsored by
Lopez Island Realty
and
71 other generous sponsors
Sponsor this event
Homes often represent dreams, and those on the 16th Annual Home Tour, Saturday, September 14 from 10 a.m. to 4 p.m., are no different. These homeowners built with dreams of honoring the landscape, and enhancing family and art. Even more Lopezian, many of the homes represent transitions into lives of new DIY confidence.

Angus Fraser and Janet Peterson took over six years to complete their Channel Road home. The open living room, with floor-to-ceiling windows, breaks into smaller lofts and sitting areas, mixing shared and private space. Special features include the breathtaking stone fireplace opening both to the inside and the patio, and the dining table Angus built from a fallen tree.

When Kaylee and Trevor Steinbrueck began work on their Limes Road property, their budget and experience were equally limited. But lengthy design discussions produced a 1700-square foot, two-story cabin with soaring ceiling and open kitchen, made from trees Trevor cleared. Trevor also did the electrical work, but, in classic Lopez style, the Steinbruecks traded their Jeep for the septic system. Friends and family helped; Trevor's dad built the impressive fireplace with local stone. During the over-three-year construction, the couple started Steinbrueck Family Excavation, LLC, supporting the dreams of fellow Lopezians.

Center Road's Sweetbriar Farm was built by Doug Benoliel and Tamara Buchanan, starting in 2011. Buchanan did the architectural drawings, and the couple designed everything to reflect their values: "green" products, cost-effective materials, energy and space efficiency. No detail was too small, from the siting for maximum passive solar gain to the complete use of LEDs and energy-efficient appliances. A five-acre garden thrives there, and Buchanan's stone sculptures adorn the property indoors and out.

George Selg's house on Coyote Lane certainly represents "Home as Dream," but a dream long deferred. Back in 1977, says Selg, "My wife and I first set foot on Lopez and fell in love with a property that would see 42 years of friend and family gatherings." They were told the site was too steep and rocky to build on. Then in 2013, Selg's wife died, leaving him with a decision: give up on Lopez or build a home in the place he loved. In 2016, using 35 year-old plans, Selg built. The lodge-style home features expansive windows framing the spectacular view of Swifts Bay; geothermal heating/cooling; 300 yards of rock wall like a huge welcoming smile, and a 42-foot beam in the great room.

Kristen Ryan's home in the Lopez Community Land Trust's Salish Way development is the Tour's newest-finished this year! But this home also represents a transition. Working with skilled carpenters, Ryan-a new teacher at Lopez School-learned to use unfamiliar tools, and incorporated key changes to the plans, making the 477-square foot space sweet and cozy for herself and her young daughter. She added a second door for garden access, a skylight above the loft, and a wall to enclose a small bedroom on the main floor. She also modified the sunny kitchen from U-shaped to L-shaped, integrating it with the living area.

While Amy and Bill Ferron did not build their Bayshore beach home, it fully emphasizes art and nature. Built in 1985 by Seattle architect Edward Carr, the home stretches in sections that step back from the beach, expanding the view. The upstairs master suite floods with morning light, framing Fisherman Bay and San Juan Channel. After purchasing in 2001, the Ferrons finished the interior of the matching garage and studio to house Amy's artwork and piano, adding a loft that extends into the clerestory windows to create a light-filled hideaway and sleeping space.

Of all seven Tour houses, Marion Speidel's Mud Bay home best embodies the "build-a-dream/shape-a-life" theme. Speidel arrived on Lopez in 1971, she says, "on a motorcycle with sleeping bags, cook kit, tube tent and my boyfriend, Jim. We planned to camp at Spencer Spit and shoot rabbits for food." Next year, guided by a retired logger, they built their log cabin-a brand-new experience. "We formed the foundation, cut, peeled and notched logs by hand with minimal tools," Speidel says. "We mixed concrete in a mud box." The work so captivated the couple, they got jobs as carpenters, eventually starting their own construction company.

When their daughter was born, they added onto the cabin. In 2001 the couple split, and Speidel started Mud Bay Builders. In 2013, Mud Bay built the barn designed by Speidel, her daughter, and James McIntosh, featuring a stained concrete floor with radiant heat. Speidel has appreciated spending her working life building on Lopez, but "I haven't eaten rabbit for years."

The Home Tour is the primary fundraiser for the Lopez Center for Community and the Arts. Tickets are available on the LCCA website; at Paper Scissors on the Rock; Lopez Bookshop; the Farmers' Market, and on the Center lawn on Tour day from 9:00 to noon.

Written by Gretchen Wing and the Home Tour Committee